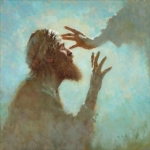 The readings for this Sunday ask us to consider whether we are optimists or pessimists. We meet both kinds of people in the readings. In the first reading, Job bemoans the very fact of his existence. He, who had been greatly blessed by God with wealth, family, good health and a good name suddenly lost it all. The bottom fell out of Job’s world and his optimism, hope and joy seemed to evaporate.

In the Gospel reading, Peter’s mother-in-law was sick with a fever which rendered her unclean and unable to participate with her family, friends and neighbors in public events.

The difference between Job and Peter’s mother-in-law was the people around them.  Peter’s mother-in-law had people who cared enough to get her the help she needed.  They told Jesus about her and he healed her. Job’s “friends”, on the other hand, exacerbated his situation by trying to find someone to blame for his troubles. These readings call us to examine our own response to the difficulties of life and how we help others cope with their struggles. Are we pessimists with complaints about every evil in the world or are we what Jesus asks us to be—“hope-givers?”

On January 25, my nephew Patrick Duran, died at the Rosebud Reservation in South Dakota. From early in his life he was enthralled with Native American culture and traditions. Throughout most of his life he lived with and among his Indian friends and became a part of their family. He was a seeker who embraced Native spirituality.  He traveled all over the United States, Mexico and even went to South America to learn about and to immerse himself in the culture and traditions. He was an activist in the American Indian Movement, La Rasa, and the boycotts with Cesar Chavez.

At his funeral service we were surprised to find the funeral home three-fourth filled with his Indian friends or I should say “family.”  When we opened the floor for sharing stories about Patrick, I was astounded not only by the stories they told about his life among them, but by the emotions, the tears and the grief they expressed at his passing.They called him best friend, brother, son, father and one who loved them so much he would give anything to help them. The image they left us of Patrick was that he was an optimist, a repairer of broken spirits, and a healer of wounds despite his own weakness. It seems that his very presence among these people was one who brought love, hope, courage and joy to all –an antidote to pessimism.  In my estimation he was a “Jesus figure” for them.

Eventually Job’s trust in God enabled him to find the hope and courage to endure his sufferings. St. Paul, in the second reading, found such hope in God and in the Gospel that he could not help but preach. When he did, he made every effort to adapt himself to the needs and circumstances of his listeners so that they too could find hope in the good news of salvation. And Jesus acted as a giver of hope to those he taught, healed and forgave, and in the end, he died so that human hope never be extinguished.  Difficulties are inevitable. I find that I am free to choose the attitude with which to deal with them. I pray that I do not get lost in negativity but trust in God to make my faith stronger and to be a hope-giver to others.