Possibility!  Possibility is the word that comes to my mind when I think about Jesus’ ascension into heaven.  It seems that at one time we needed to “spiritualize” everything especially the things that happen in scripture.  When I reflect on the ascension of Jesus I can’t help but turn my mind to the scientific discovery that Newtonian physics do not always apply.  We know that all of creation, including human beings are made up of particles that are profoundly connected to one another.

We know that particles can be in two places at the same time, that particles can behave like particles or like energy waves at any given time and that a broken particle with its halves placed thousands of miles apart will simultaneously respond exactly the same way when only one half is affected.  Jesus being “taken up to heaven” a seeming impossibility now offers endless possibilities.  Our knowledge of the creation is growing.  Our knowledge God is ever unfolding.

As we come to the close of this year’s Lent and Easter Seasons, I find that science sheds a new light on the whole story of Jesus. 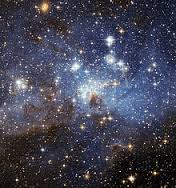 The possibilities just fascinate me.  God, infinite, the beginning of all creation plunges into the possibilities of a life truly lived with love, creator becomes creature.  I wonder at the incarnation, the life Jesus lived, the lives he literally touched and healed, at what he thought and felt the moment he realized that death did not have a hold on him and what his physical form was like after his resurrection.  I wonder too why it was necessary for Jesus to go to the Father before he could send the Holy Spirit.  Whatever the divine reasons are, we know that in leaving, Jesus opened the possibility of something more, something new.

What is new?  Scripture tells us Jesus’ last action was “blessing”.  Current science gives us no excuses.  Neuroscientists can show empirically that prayer, meditation and ritual action change our recognition of what is real.  We can no longer spiritualize the life of Jesus and put following him, his life, death, resurrection and ascension in a realm of impossibility.  We are living in a universe that is connected to its very foundations.  What each of us does affects all.  The resurrected Jesus’ last action speaks loudly.  Even after betrayal, torture, and death, there is life, blessing and the promise of a different reality.

We, the Sisters of Benet Hill Monastery, journeying together, are called to seek God in daily celebration of life. Recognizing our giftedness, we listen and respond through creative prayer and life-giving service.

Search for a topic